In short, Aveva can offer everything, from data collection and communications to control systems, through visualization of SCADA/HMI operator interfaces, established MES systems for monitoring and optimizing production, process data historization and back analysis using analytical clients, web interface or Microsoft Office products. AVEVA software can be operated locally in the production plant (on premise) or on a cloud infrastructure. 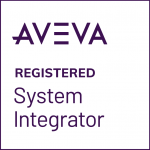 Our company is a registered system integrator of AVEVA / Wonderware Software.

Please send us your inquiry. Our authorized AVEVA specialists will suggest the best solution that will fulfill all your criteria and requirements.

AVEVA Group is a multinational IT company with headquarters in Cambridge. AVEVA was founded in 1967 as a UK government funded research institute at the University of Cambridge. In 1976, AVEVA released a revolutionary computer based system called PDMS (Plant Design Management System), that allowed designers to create a virtual 3D model of a processing plant leading to construction designs, material requirements and clash analysis.

AVEVA was spun out of Cambridge University in the late 1980s as a private company and became a publicly traded company in 1996. Over the next 22 years, AVEVA grew it’s technology stack enhancing it’s industrial focused design applications as computer technology flourished globally. These solutions expanded AVEVA’s engineering design capabilities into P&IDs, electrical, ship design, capital project contract management, laser scanning and more.
In the Czech Republic, AVEVA software is distributed via Pantek s.r.o., where we play a role as an integrator of AVEVA software.